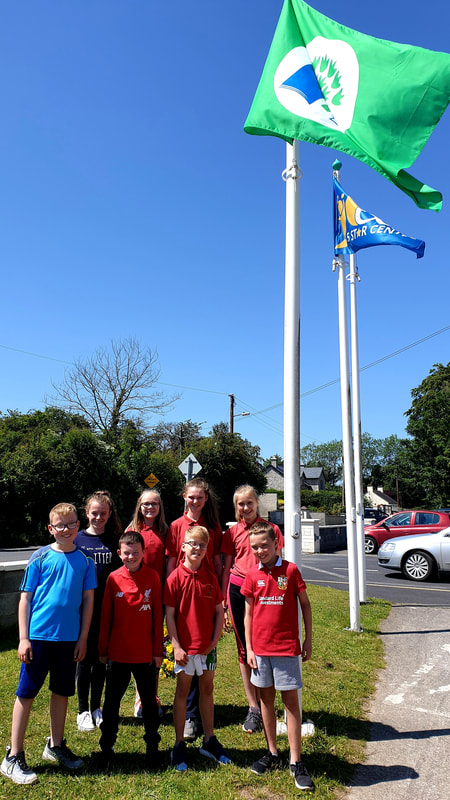 Our 5th Green Flag flying high in blue skies in June 2019. The boys and girls of 5th and 3rd class are holding flags which represent the other 4 flags previously awarded to St. Patrick's NS. 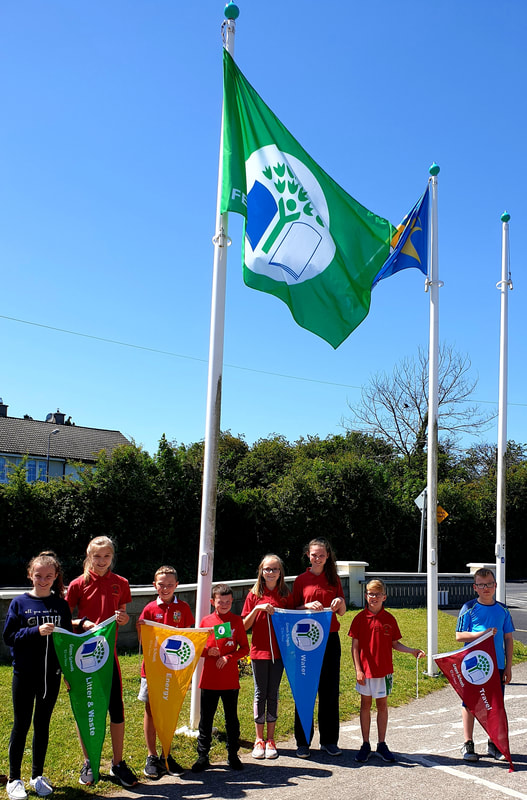 On Tuesday the 21st of May, St. Patrick's was awarded its 5th Green Flag 'Biodiversity' at a ceremony in The Helix Theatre, DCU. It was a super event and a proud day for all the students and staff.

On the day, two of the students from the green school committee, Sophie and Sarah received the flag on behalf of the school.

As an additional honour, a group of our 6th class girls were asked to perform our Green school Code. The girls put the code into a very catchy rap. Not many can say they performed on stage at the Helix so this was definitely a day to remember and one which they can be very proud of.

We would like to thank all the students and staff for their efforts and interest which made this possible. Please see the gallery for pictures from the ceremony and a video of the girls performance.

Well done to everyone who walked to school together this morning from Pairc Mhuire. We had approx 60 children and adults walking to school. It was a fabulous morning for it and we hope that you'll keep up the walking over the summer months. It's great for you and for the environment... and most of all, it's great fun!! 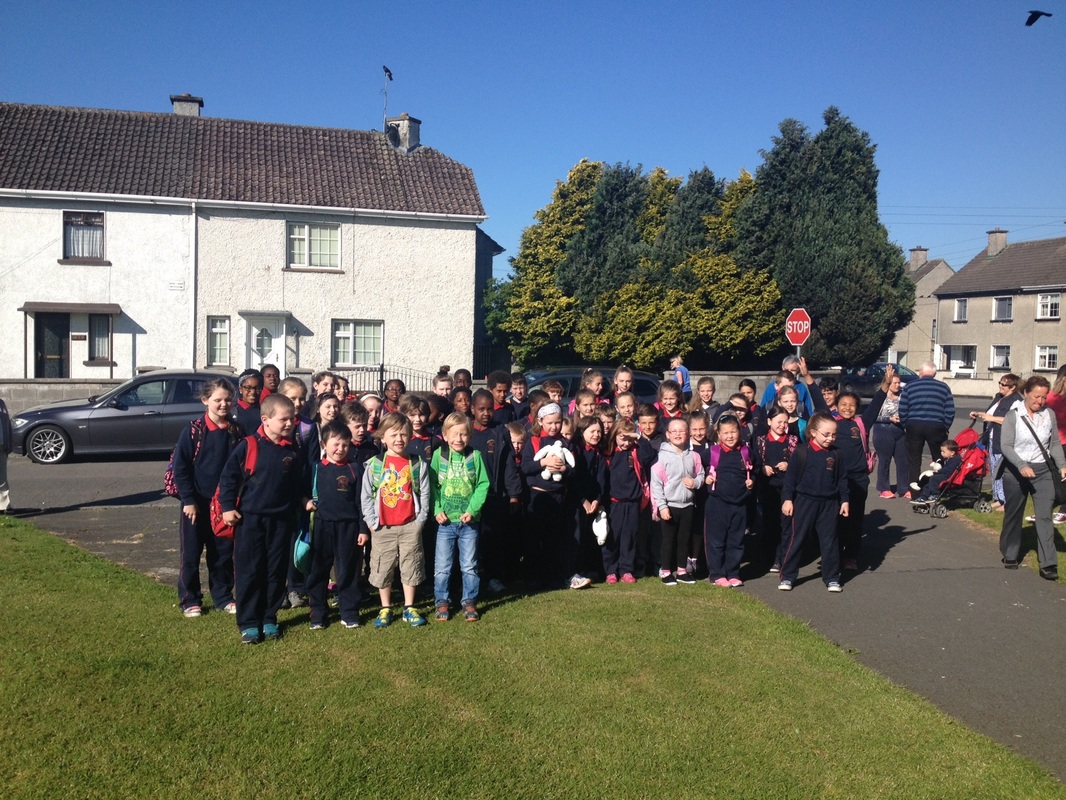 Congratulations to all the winners of the Golden Boot Award in 2014-15.

Best of luck to all other class this year in the Golden Boot Awards. Don't forget; your class can win the award by travelling to school using one of the following five methods.
1. Walk
2. Cycle
3. Carpool
4. Bus
5. Park & Stride

Our second BOW WOW event was a great success with 70 people in attendance. Keep up the hard work everyone!!

Our first BOW WOW day of the school year was a great success. 72 pupils and 10 adults walked from Pairc Mhuire to school on that morning. Thank you to everyone who took part in this walk. Watch this space to find out when our next organised BOW WOW will take place. In the meantime, please continue to walk, cycle, take the bus, carpool or walk and stride where possible! 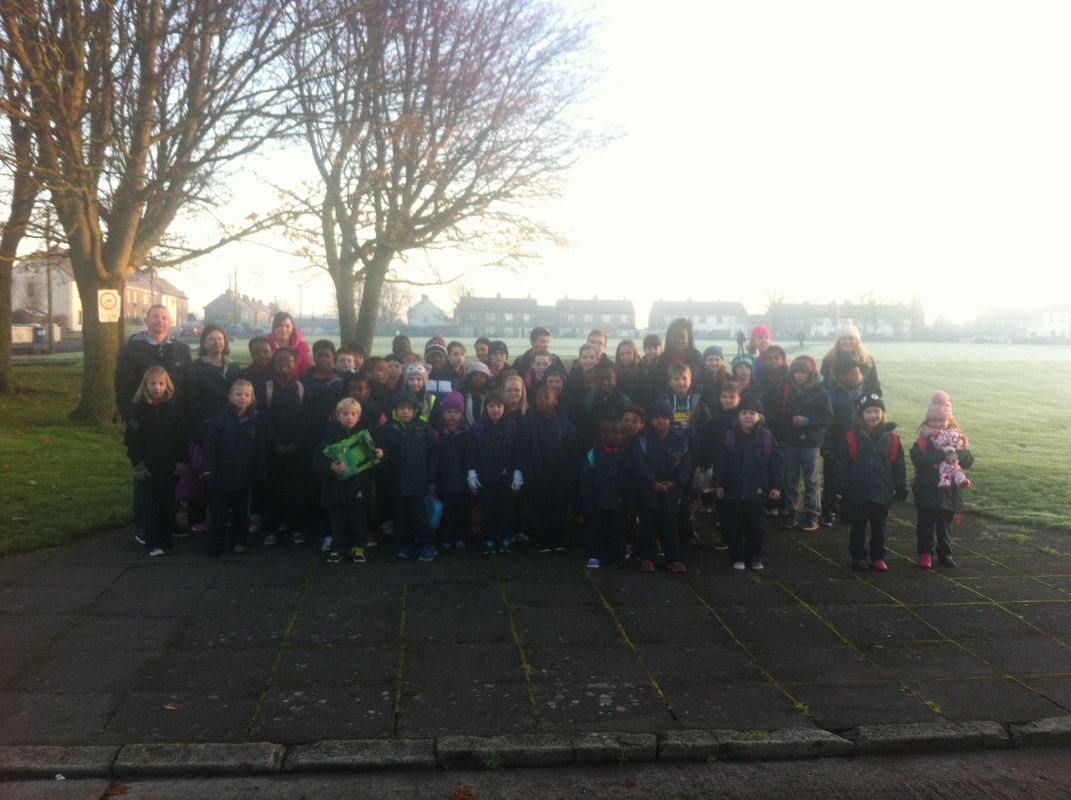 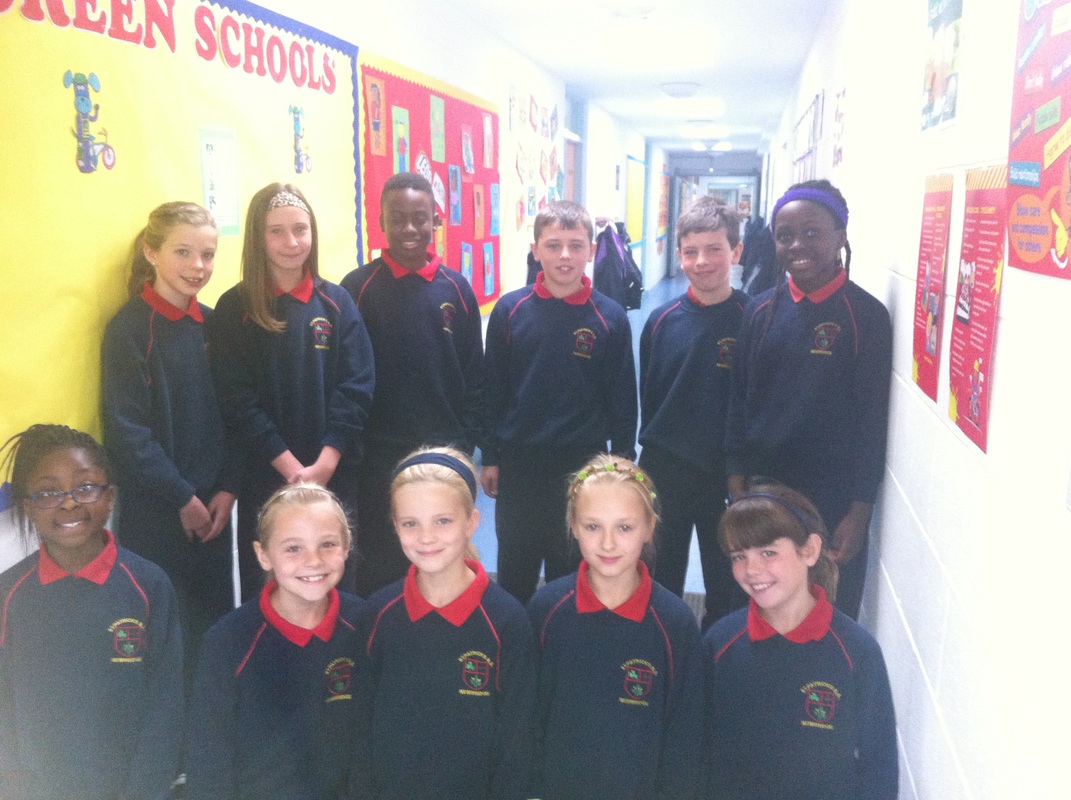 St Patrick's has an active green school committee made up of a minimum of two pupils from each class group from 2nd to 6th and staff. Every two years the committee applies to have its work evaluated and if successful it may be awarded the prestigious award of a green flag by An Taisce.

St Patrick's has already been awarded three green flags. One for the theme of recycling, one for the theme of energy and the other for the theme of water. Much hard work went into these projects and a lot of time and effort had to be put in during and outside of school hours, with the committee working over lunch breaks regularly.

We are currently working towards our fourth green flag and we are studying the theme travel. Last year all class took part in the RSA street smart programme. This took place over two days when our school hall was converted into a mini town as part of the program. As you are now aware, we are working towards obtaining our fourth flag for travel. We cannot do this without your help!

Things that you could do to help us win the flag are:

Did you know?
Walking and cycling to school makes children more alert and ready to face the school day than if they had been sitting in a car. Research shows that educational achievement improves in line with increased physical activity.

Did you know?
In Denmark bicycles outnumber cars two to one! This means there is less need for parking spaces or huge roads.

Did you know?
Of the fuel put in the average car 80% of the energy is lost in heat and through the cars exhaust. Only 20 % is used to actually turn the wheels.

Did you know?
That our 15 principal railway stations are names after the executed leaders of the 1916 Easter rising. How many can you
name?